Totma: a small town with a big history 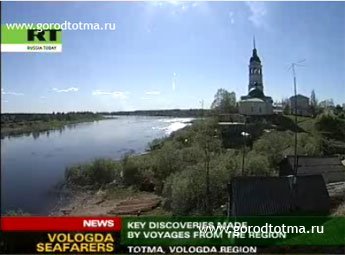 The town of Totma in Russia’s north might be small and relatively unknown, but it has played a key role in the country's history. One of the oldest in Russia, it is known as a town of museums and seafarers.

With a population of only 10,000, it is home to a range of stunning architecture. The town is known for its churches dating back to the 18th century, but it is even more famous for its museums and seafarers.

In the second half of the 18th century, 20 expeditions left from Totma – a fifth of all the voyages to leave Russia at the time.

One of the most important led to the discovery of the Commander Islands and the Aleutian Islands off the coast of Alaska. The crew rode on horseback across Russia to Irkutsk in Siberia before sailing down the river to reach the Pacific Ocean. But they weren’t only looking for land. Another goal of the expeditions was to find ways of developing the fur trade and getting income from it.

After returning home from sea the merchants donated their money to building churches in the town. All of them share distinct features with unique ornaments on the wall which are said to look as if they float across a blue sky in the direction of the sun.

One such merchant was Ivan Kuskov. He was born in Totma in 1765, and after making his fortune, returned to spend his last days there, where a memorial museum to his life now stands. At the age of 22, Kuskov left Totma for Irkutsk, soon becoming involved in the Russian-American company, where he was Deputy Head for more than 20 years.

But it is his voyage to America and work in the fur trade for which he is most remembered. His main achievement is considered to be the foundation of a fortress in California. Kuskov spent 30 years of his life, building Fort Ross in Bodega Bay. To honour this, Ivan Kuskov was awarded a medal, recognising him as a national hero.

It might be nearly 200 years since his death but in Totma his legacy lives on. Every year on the 2nd Sunday of August, the church bells ring in Totma and at Fort Ross to ensure his work for Russian-America is never forgotten.